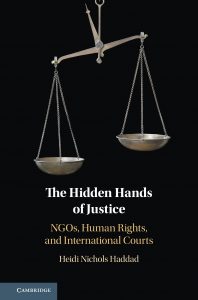 My research sits at the intersection of the fields of international relations and international law. Most broadly, it studies the global governance of human rights. One major research thread examines and documents interactions between states, non-state actors, and intergovernmental organizations and their effects on norms, law, and judicial mechanisms. My most recent project examines the potential of cities to localize and actualize international human rights norms and mechanisms.

The Hidden Hands of Justice is the first comprehensive analysis of non-governmental organization (NGO) participation at international criminal and human rights courts. Drawing on original data, it maps and explains differences in NGO participatory roles, frequency, and impact at three judicial institutions: The European Court of Human Rights, the Inter-American Human Rights System, and the International Criminal Court. It demonstrates that courts can strategically choose to enhance their functionality by allowing NGOs to provide needed information, expertise, and services as well as shame states for non-cooperation. Through participation, NGOs can profoundly shape the character of international human rights justice, but in doing so, may consolidate civil society representation and relinquish their roles as external monitors.

The op-ed, “The International Criminal Court was established twenty years ago. Here’s how,” based on the research in this book, was published in The Washington Post, Monkey Cage, in July 2018.

“Shadow reports” by non-governmental organizations and national human rights institutions are commonplace within the international human rights treaty monitoring process. They became so for a simple reason: shadow reports improve the reporting process by providing useful information. This Article contends that shadow reports from cities would do the same. Using the example of reports sent by the City of Berkeley, California, this Article advocates for institutionalizing city shadow reporting because such reports can provide frontline information and help socialize cities into human rights compliance, even (and perhaps especially) when at odds with their national government.

The op-ed, The US hasn’t signed the world’s foremost women’s rights treaty. Activists have gotten local versions passed instead., based on this research, was published in The Washington Post, Monkey Cage, on International Women’s Day, March 8, 2020.

“After the Norm Cascade: NGO Mission Expansion and the Coalition for the International Criminal Court (CICC).” Global Governance 19(2) (2013) 187-206.

The literature on transnational advocacy focuses on the battle for norm adoption, yet little is known about what happens to advocacy organizations after they succeed. Do they disband, take up another cause, or expand their mission? This article explores the organizational response of mission expansion through a case study of the Coalition for the International Criminal Court. The CICC—a prominent global coalition of local and international nongovernmental organizations—was instrumental in advocating for the formation and ratification of the Rome Statute, the treaty that created the International Criminal Court. Following the entry into force of the Rome Statute, the CICC did not disband or shift issues, but instead expanded its advocacy efforts and began service provision on behalf of the ICC.

Widespread and systematic rape pervaded both the genocides in Bosnia–Herzegovina in 1992 and in Rwanda in 1994. In response to these conflicts, the Yugoslav Tribunal (ICTY) and the Rwandan Tribunal (ICTR) were created and charged with meting justice for crimes committed, including rape. Nevertheless, the two tribunals differ in their relative success in administering justice for crimes of rape. Addressing rape has been a consistent element of the ICTY prosecution strategy, which resulted in gender-sensitive investigative procedures, higher frequencies of rape indictments, and more successful prosecutions. In contrast, rape has not been a central focus of the ICTR prosecution strategy, which resulted in a sporadic approach to gender-sensitive investigative procedures, inconsistent rape indictments, and few successful prosecutions. What accounts for this disparity in rape prosecutions between the Rwandan and Yugoslav tribunals? Building off the existing literature that discusses factors such as legal instruments and resource capacity of the tribunal, this article argues that transnational advocacy helped generate the necessary political will to adopt and implement legal norms regarding crimes of sexual violence at the ICTY and the ICTR. Following the importance of transnational advocacy as agents of norm change, this paper also explores the antecedent conditions of advocacy mobilization that conditioned different levels of mobilization vis-à-vis the ICTY and the ICTR, including media attention and framing, connections and interest match with local groups, and geopolitical context.