Teaching is my passion. 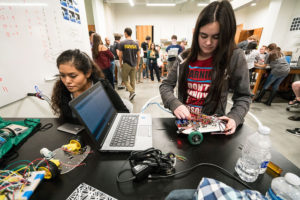 But teaching science is about more than a simple transfer of knowledge – it’s about building community, empathy, and an understanding of how our science fits into the world around us.  At its best, teaching is rooted in humanity, in nurturing scientists and scholars who will work for equity, to advance human dignity, and for a more just world.

Here are some examples of curricular themes woven through my physics courses:

Physics is a deeply human activity, reflecting both the richnesses and the biases that we scientists bring to it.

In my annual Modern Physics course, we looked through our (entirely standard and widely used) textbook and came to the shocking realization that of the physicists whose work is presented in the book, 99% are men and 98% are white.  This led to us examining the effects of bias and privilege in physics and in our classroom: Who gets to participate?  Whose work gets noticed?  And what role does each of us play in perpetuating this?  We ended the semester by finding ways to make positive change in the areas that most interested each student, and we partnered with an astronomy class to showcase our work in a public, community-building celebration, Decolonizing Physics and Astronomy.

Similarly, in my Intro to Electronics course, we examined the question of why diversity matters, in response to questions asked by Justice John Roberts in the 2015 affirmative action case Fisher vs. The University of Texas: “What unique perspective does a minority student bring to a physics class?” and “What [are] the benefits of diversity…in that situation?”  The response from thousands of physicists is here.  Those appalling questions drove home to me that by continuing to teach physics as search for fixed “fundamental truths,” we (inadvertently?) reinforce the idea that physics is a cold, unemotional discipline divorced from humanity and the world around us.  Why then does it matter if Roberts’ “minority student” is in our physics classrooms, beyond the obvious potential loss of human capital?  We set out to answer that question in my Modern Electronics course; check out this page for details.

The physics education canon should be broadened to expose students to the remarkable contributions by a widely diverse community.

Talking with a colleague about his Chicano History class inspired me to take a second look at my own course in Modern Physics.  Once I really looked, I realized that nearly every example I gave through the course of an entire semester showcased the work of a white man.  To see how we addressed this in my Introduction to Modern Physics course one year, follow the link above.  But, before you do that, try it yourself: see if you can write down the names of five modern physicists who are women and/or people of color.

Physics is a living discipline that can and should be rooted in the fight for human dignity and social justice.

How many of us have lost a bright, talented physics student to the discipline because s/he “wants to do something more people focussed?”  It has happened to us all, and the literature is clear that this phenomenon is more than anecdotal: the perception of physics as cold and inhuman is a major roadblock to participation by underrepresented groups.  My Intro to Electronics course partners with a local underserved public high school; details of this partnership can be found at the link above.