Physics is a deeply human activity, reflecting both the richness and the biases that we scientists bring to it.

Curricular focus: The role of “diversity” in physics: responses to Justice Roberts, in Fisher vs. The University of Texas (2016, Fisher II) 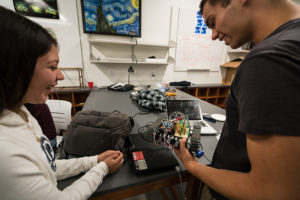 Justice John Roberts asked in the 2016 affirmative action case Fisher vs. The University of Texas “What unique perspective does a minority student bring to a physics class?” and “What [are] the benefits of diversity…in that situation?”  The response from thousands of physicists is here.  Those appalling questions drove home to me that by continuing to teach physics as search for fixed “fundamental truths,” we (inadvertently?) reinforce the idea that physics is a cold, unemotional discipline divorced from humanity and the world around us.  Why then does it matter if Roberts’ “minority student” is in our physics classrooms, beyond the obvious potential loss of human capital?

In my Modern Electronics class, we addressed that question in a series of homework assignments, lightly edited for clarity below.

As we talked about in class, I’d like for us to explore the question recently raised by Justice John Roberts in a Supreme Court case on affirmative action (Fisher v. The University of Texas 2016): “What unique perspective does a minority student bring to a physics class?” and “What [are] the benefits of diversity… in that situation?” In his comments, Justice Roberts is narrowly focused on race, but I suggest that we broaden our conversation to include “diversity” or “minority” along a number of axes. Justice Roberts’ question has led both to general outrage and to a number of thoughtful responses, drawn from a range of fields, which we will read together over the course of the semester.

So here’s the assignment: I’ve posted the transcript of the Supreme Court hearing (transcript of supreme court hearing); I would like you to skim that enough to get some sense for the context in which Justice Roberts asked the question (which appears on p.55). I have also posted a response, in the form of a letter to Justice Roberts, signed by more than 2200 physicists and scientists, including some Pomona students and faculty. I would like you to read the response letter and to skim the court transcript. Then write a brief response: Why did Justice Roberts ask that question, and what are the key points made in the response letter? What do you think of those arguments? Are there other arguments or counter-arguments that you would make?

Again, I’m grading this part based on whether you’ve engaged with the readings and provided a thoughtful response, NOT on your particular views.

Let’s continue our exploration of Justice Robert’s questions “What unique perspective does a minority student bring to a physics class?” and “What [are] the benefits of diversity… in that situation?” It seems to me that Justice Roberts is not asking about why certain groups of people are underrepresented in physics; nor is he referencing the obvious – and compelling – equity arguments in favor of diversity. We’ll come back to both of those questions soon, but for now let’s focus on the question he actually asked, which is about whether members of underrepresented groups might bring a unique perspective to physics that has been overlooked because of our current homogeneity.

So, in that spirit, let’s read the two “feminist physics” papers referenced in the response letter, both of which explore the question of how a feminist approach might change physics.

Here are a few questions that I would like you to explore:

The arguments in these papers are complex and thought-provoking. The idea isn’t to get to a right answer here, but rather to allow your thoughts to be provoked! I’ve asked a series of large questions here, but you don’t need to answer them at great length. Please pick one or more that interest you and write a paragraph or two in response.

Here’s a pair of readings exploring the same question as last time: whether a diversity of perspective can lead to better (or even just different) science. I chose these in part because the first one explores how these ideas might impact the workplace, including tech companies. The articles do, however, skate a little close to the “why diversity is good for the majority” line of argument – it might be worth keeping a slightly skeptical eye on that.

The first of these articles draws on examples mostly from the business and legal worlds to argue that diversity leads to higher quality science, whereas the second article primarily draws its examples from biology and the social sciences. What are the main points they raise and the evidence to support them? Can you think of extensions or parallels to their points that might be relevant to physics, in either an academic or industrial setting? Or counterexamples drawn from physics, ways in which some of the points they raise do not apply to physics?

The following two readings, which are both talking about the impact of racial stereotyping in STEM, make an interesting pairing. While the stereotypes involved in each case are at first glance opposites of each other, I think there are some interesting parallels in these two papers.

Ebony O. McGee, Danny B. Martin, ‘‘’You Would Not Believe What I Have to Go Through to Prove My Intellectual Value!’ Stereotype Management Among Academically Successful Black Mathematics and Engineering Students,” American Educational Research Journal, December 2011. [McGee_and_Martin_2011]

Here are some questions to get you started thinking about these papers. Feel free to respond to any or all of these questions…or to pick out some other aspect of the readings that interest you.

McGee and Martin say “Our focus on race does not imply that race, class, and gender intersections are unimportant. However, more nuanced understandings of race—understandings that do not reinforce deficit explanations for disparities in achievement and schooling experiences—must be developed among mathematics and science educators if these intersections are to be seriously considered.” They go on to quote Martin in a 2009 paper saying “One consequence is a widely accepted, and largely uncontested, racial hierarchy of mathematical ability. Disparities in achievement and persistence are inadequately framed as reflecting race effects rather than as consequences of the racialized nature of students’ mathematical experiences.” What do they mean by “deficit explanations”? And what distinction are they making when they talk about “race effects” vs “the racialized nature of students’…experiences”? Can you give examples from the conversation you hear at Pomona – or even from your own writing in these assignments – of “deficit explanations”, explanations “framed as reflecting race effects”, or arguments based on “the racialized nature of students’…experiences”?

Alternatively, reflecting on the same set of quotes from the McGee and Martin paper as above, can you apply these ideas to the other paper by Trytten, Lowe, and Walden? In other words, as you think through the stereotypes they discuss about Asian students in STEM, which of these are “deficit explanations”, explanations “framed as reflecting race effects”, or arguments based on “the racialized nature of students’…experiences”?

The stereotypes discussed in these papers in the context of race mirror in some respects common stereotypes around gender in STEM. To what extent do the arguments about the impact of these stereotypes extend to gender as well? For example, is “men are good at math” an “awful stereotype” as well? We’re used to thinking of this as an advantage, but are there ways in which this stereotype negatively impacts men? (If you choose to write about this, please look over the impacts on Asian students documented in the article and think about how these effects might – or might not – extend to men in general.)

The papers below provide an interesting look at another underrepresented grouping in STEM, namely LGB people (regrettably, the T, Q, A, etc are mostly missing here). The literature on this subject is extremely thin so far. Here are two papers by the same author. I think the first one is the most interesting in that it contains some thought-provoking ideas, but the paper is anecdotal in the sense that it is written around interviews with 17 students at a single university. The second paper is based on a large sample-size statistical analysis, but it lacks the “big ideas” depth of the first one. Hopefully the pair of them together make for an interesting combo!

Here are some questions to get you started thinking about these papers. Feel free to respond to any or all of these questions…or to pick out some other aspect of the readings that interest you.

Cech asserts that “…both pervasive prejudicial cultural norms and perceptions of competence particular to the engineering profession can limit these students’ opportunities to succeed, relative to their heterosexual peers” and “Norms specific to the engineering culture silence the concerns of LGB students.” What are some of these “engineering-specific” norms? Do these norms – or similar ones – arise in physics as well?

The paper below examines both the experiences and coping strategies of women of color in physics. Ong frames a number of interesting, thought-provoking “big ideas” here that complement some of our earlier readings rather nicely.

(I also uploaded a second, related paper titled “Women of Color in STEM” [Johnson_2011], which, in the spirit of listening to your feedback about long readings, is optional. But I’m including it, thinking that you might enjoy it.)

As usual, I’m providing some questions to get you started thinking about this paper. There are a LOT of interesting ideas in this paper, however, so please feel free to instead address some other aspect of the reading that interests you.

Ong’s paper includes an interesting quote that ties together a number of ideas that we’ve been “discussing” in these readings: “Scientists gain much of their authority and prestige in their fields and from the public by maintaining science’s appearance as objective, universal, and context-free… Because they claim to inhabit a “culture of no culture,” … physicists in particular seldom acknowledge that doing science entails subjective judgments, particularistic practices, and context-laden assertions. Matters of gender, race, ethnicity, social class, immigration status, and sexual orientation have no acknowledged place in this cultureless culture.” How does this “culture of no culture” impact women of color in STEM? Do those ideas extend to other underrepresented groups in the field? What are your thoughts after the various readings we have been doing: does physics inherently have more of a “no culture” than, say, biology?

Is Cech’s concept of a “technical/social dualism” apparent in this paper? How might that dualism be experienced by women of color, based on the results/discussions in Ong’s work?

Recall that we started this conversation by thinking about Justice Roberts’ questions “What unique perspective does a minority student bring to a physics class?” and “What [are] the benefits of diversity… in that situation?” Please write a response letter to Justice Roberts, using the readings and your responses to them in order to address the questions he raised. You don’t need to actually send your letter to Justice Roberts…unless you want to… the goal here is to try to synthesize all these various parts we’ve thought about into a coherent conclusion.