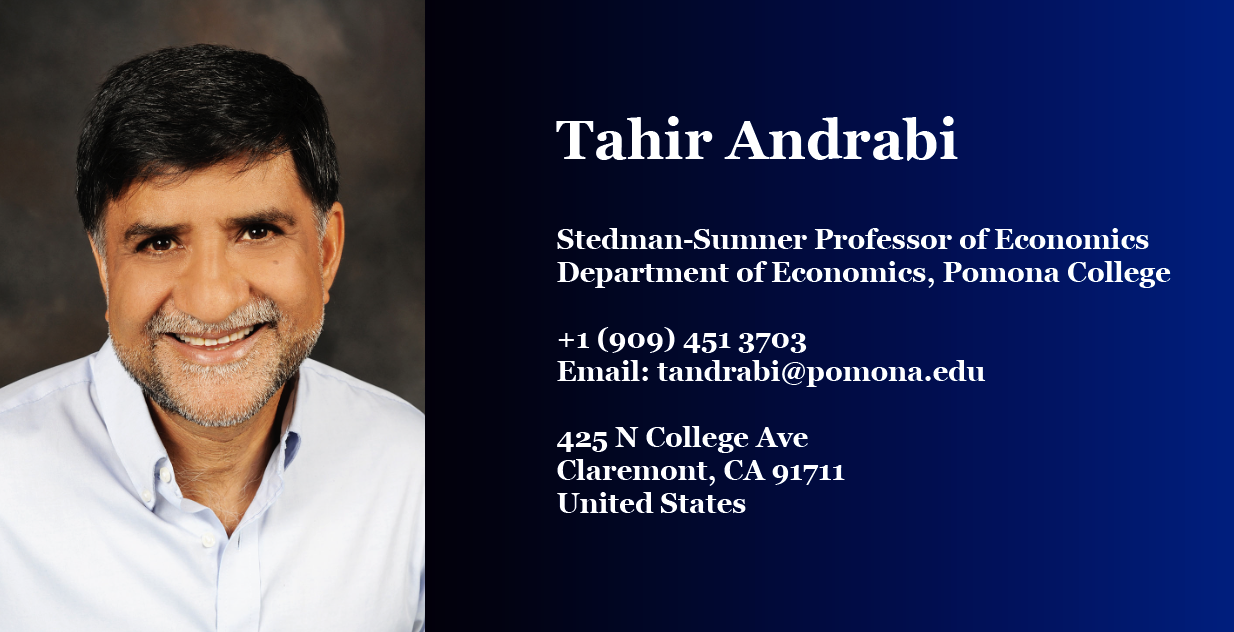 Tahir Andrabi is the Stedman-Sumner Professor of Economics at Pomona College. He is Invited Researcher at JPAL MIT, and has been a visiting scholar at MIT, a senior research associate at STICERD LSE, and a consultant for the World Bank. He was a member of the tax and macroeconomic committees of the economic advisory board of the government of Pakistan in 1999-2000. He is a co-founder and Director, Social Policy and Public Goods Program of the Center for Economic Research, Pakistan in Lahore, Pakistan. He was the head of the Pakistan Country Research Team of Research in Systems of Education (RISE). He was the inaugural Dean of the Lahore University of Management Sciences School of Education in 2017-2020.

His research on education (LEAPS–Learning and Educational Achievement in Punjab Schools) on quality of primary education in rural Punjab has been funded over the last decade and a half by the World Bank, the National Science Foundation, the Economic and Social Research Council UK and most recently by UK DFID through RISE. He was also the PI on a National Academy of Sciences/Higher Education Commission, Pakistan grant on evaluating the recovery from the 2005 northern Pakistan earthquake.

He co-founded the website risepak.com to help coordinate relief in the aftermath of the October 2005 earthquake. The website was awarded the Stockholm Challenge Award (2006) for the best ICT project in the public administration category. His research has been covered by The Financial Times, Toronto Globe and Mail, USA Today, The Christian Science Monitor, Newsweek, The Economist, Foreign Policy and news media around the world. (See The Economist magazine cover story, the American Economic Association research highlights for media coverage of education research and the Associated Press/Fox, Newsweek, BostonGlobe, Dailytimes, USA Today, The Guardian, the Globe and Mail and The Dawn for news coverage of the research on the earthquake.)

He was the Inaugural Dean of the LUMS School of Education (SOE) in 2017-2020. He was the project leader (2016-2017) for conceptualizing, setting up, and operationalizing the SOE. The school was the first of its kind in the country and created a new level of rigor in teaching and research and a prominent voice in setting a new agenda for education in the country.

He is the leading principal investigator of Targeted Instruction in Pakistan (TIP), a large-scale remedial education program. The program is designed to help primary-aged children catch up to grade level in foundational numeracy and literacy following COVID-19 school closures and other educational disruptions.

Professor Andrabi is a graduate of Swarthmore College and holds a Ph.D. in Economics from the Massachusetts Institute of Technology. He teaches classes in economic development, game theory, applied econometrics, and empirical microeconomics.