Since Rousseau, modern civilization is at once the dream of the emancipation of mankind and a nightmare: culture carries with it its own crisis. In the twentieth century, culture has become the major challenge of civilization: it represents a new political and social battleground. The critic of culture written by philosophers such as Schopenhauer, Spengler, Simmel, Lukacs, Benjamin, Kracauer, Adorno, Debord and Baudrillard will constitute the theorical framework of the talk. 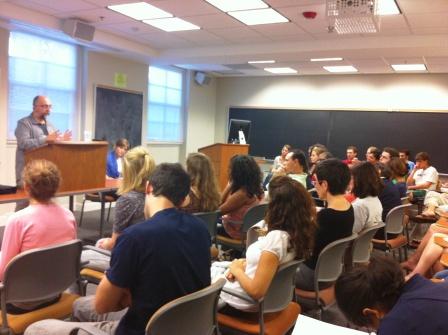 Bruce Begout, philosopher and author, speaks to about 60 students and faculty on “Culture Crisis”