Killing the Muse: The Fate of the Virgin-Seductress in Oscar Wilde’s ”Salomé” 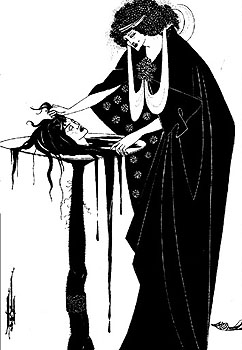 The matter of representation as well as the tension between infancy and fatality will constitute the main discursive frames of our session, enabling a discussion beyond the boundaries of genres. Because the staging of that undefined moment where virginity becomes a fatality carries a highly dramatic and aesthetic power, it was thus converted into many plays at the end of the nineteenth century.

Heather Braun will then focus on Oscar Wilde’s 1896 Salomé. There, the young and sensual Salomé brings together the qualities of the femme fataleand femme fragile. She is first described as an aesthetic object, something to be both looked at and resisted. It is the voice of Jokanaan, King Herods prisoner, that initiates and completes Salomé’s transformation from passively pure girl to suddenly sensual woman. She enters the play a biblical princess to be looked upon as virginal and silent; she leaves the play a sensually awakened and demanding Queen who knows little of the moral limits of expressing such illicit desires. Salomé’s excessive appetites and beautiful form serve as a reminder not only of a familiar fin de siècle ideal but also of an overdone stereotype that produces sterility, numbness, and decay. The dramatic Salomé hence became the best example of the young femme fatale of the decadent fin de siècle.