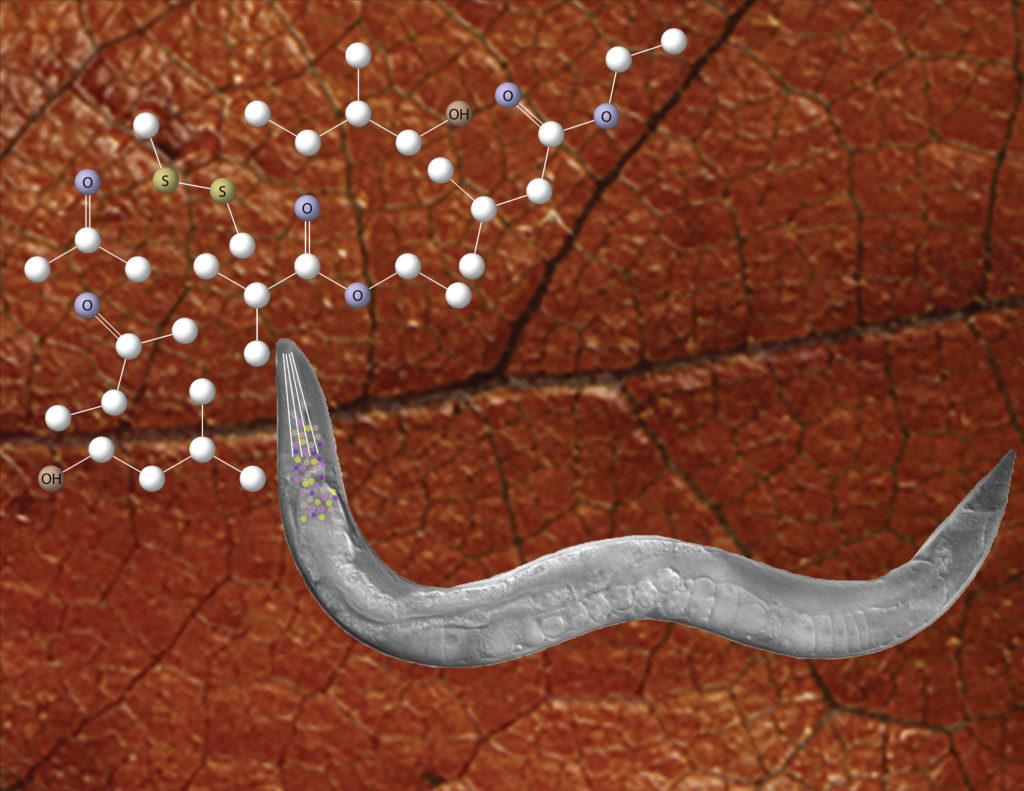 In our laboratory, we study the neuronal circuitry underlying decision-making behavior in the free-living nematode, C. elegans.  Specifically, we examine the preference of C. elegans for complex food odors and how genetic background and environment modify these preferences.

Although a lot is known about how C. elegans responds to different pure odors, less is known about how C. elegans recognizes and discriminates among complex mixtures of volatile chemicals released by bacteria, their major food source.  Does C. elegans use a single odorant or a bouquet of odorants to distinguish among different species of bacteria?  We are identifying the attractive and repulsive odorants released by bacteria found in the natural habitat of C. elegans using solid-phase microextraction gas chromatography-mass spectrometry (SPME–GC-MS) in collaboration with Charles Taylor (Chemistry Department, Pomona College).

We are examining the neural machinery underlying bacterial preference among a diverse set of bacterial species found in the natural environment of C. elegans.  Although the neurons required for the detection of specific food-odors have been well-defined, less is known about the sensory circuits underlying the discrimination among the mixtures of odors released by bacteria.

We are interested in how natural genetic variation influences behavior.  Understanding the genetic basis of behavior and nervous system function is particularly relevant for the diagnosis and treatment of inherited human neurological disorders. Although a few of these disorders have been mapped to single genes, many are likely to have both a complex genetic basis and underlying biology.  We have found a difference in the food preference behavior between two strains of the nematode Caenorhabditis elegans and that this difference has a complex genetic basis involving several genetic loci.  We are continuing to study this complexity.

Glater EE and Schwarz TL. 2009. Organization and transport of mitochondria in neurons. In The New Encyclopedia of Neuroscience (Ed. Larry Squire). 903-911.