Our lab uses techniques in biochemistry and microbial ecology to characterize  the biochemistry of microbes that inhabit a wide range of geologic features (including subsurface hydrothermal systems, hydrothermal mud volcanoes, hydrothermal vents, acidic hot springs and aquatic and marine sediments),  examining the systems used by these organisms to  transfer electrons.  These reactions serve a variety of functions; they can provide the driving force for the life of the organism, be used to maintain an internal “balance” of oxidizing and reducing compounds, or to protect against oxidative and other stresses.  Many geologically important reactions are controlled by this biochemistry, and we are specifically interested in sulfur-based respiration and the role that microbes play in the sulfur cycle and in the formation and breakdown of sulfur-containing compounds and minerals.

(1) Enzymology of flavin-dependent sulfur reductases and sulfur carrier proteins – We have characterized the structure and mechanism of FAD-dependent enzymes that use NADH to reduce sulfur-containing compounds in Pyrococcus horikoshii and furiosus (anaerobic hyperthermophilic archaea) and Shewanella loihica PV-4 (a psychrophilic (cold-adapted) facultatively anaerobic γ-proteobacteria), and are currently looking at homologous enzymes from Archeoglobus fulgidus, Thermococcus kodakarensis, and Pelobacter.

Our structural and functional studies of the NADH-dependent Polysulfide/persulfide/Sulfur Reductase protein (Npsr) has led us to the look at the role of small rhodanese-like proteins in binding, activating and delivering sulfur compounds to respiratory systems. 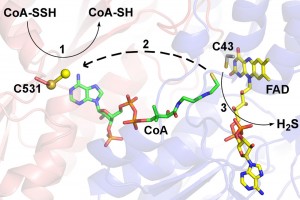 This work utilizes techniques such as site-directed mutagenesis, pre-steady state and rapid kinetics, kinetic isotope effects, x-ray crystallography and cyclic voltammetry to elucidate the ways in which these catalysts work.

(2) Microbial ecology of mud volcanoes and associated systems – We are determining the microbial community present in a deep subsurface ecosystem, made up of anaerobic high temperature and hydrocarbon-rich clay muds which are bubbling CO2 gas. This deep system is expressed on the surface as mud volcanoes whose effluent gives us an opportunity to sample the microbes living 120 m below the surface in a geothermally heated environment. The mud volcanoes are good representatives of hot subsurface petroleum reservoirs, and give us a unique opportunity to look at a community which is definitively indigenous to the deep, hot biosphere.  This system also provides us with an excellent source of novel new (to us) microbes with unique sulfur reducing enzyme systems, giving us a constant supply of new and exciting enzymes for mechanistic studies.

Hypersaline pools with high CO2 – Below is one of the saline pools that surround the volcanoes – that’s not ice on the edge of the pool (the air temperature when this picture was taken was close to 120 °F) – it’s a crust of salt precipitating out of solution. We’re characterizing the microbial communities by culture dependent and culture independent techniques present in these unusual hypersaline environments, which are supplied with a constant source of CO2 from underground. 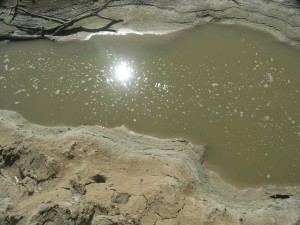 Linen Theme by The Theme Foundry