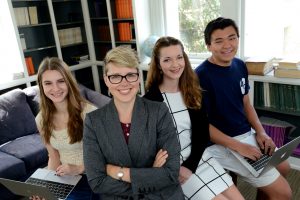 This writing-intensive freshman seminar is focused on critical inquiry and satisfies the college’s requirement for ID-1. The driving question(s) of the course include: Why do people decide to run for political office in the United States? What activates their political ambition? Does this vary by race, gender, age, socioeconomic status, or other factors? How does this compare with other countries? Engaging with both primary sources (political biographies) and secondary sources (political science studies) we will explore the various factors that prompt some people to run for office and others to run from office.

This course satisfies the Senior Seminar requirement for Politics majors. Topics vary from year to year and might include, for example, constitutional issues relating to the War on Terror (the “imperial presidency,” privacy and surveillance, torture and enemy combatants, drones) or a comparative examination of how Americans regulate certain hot-button issues and why (guns, abortion, drugs, sex, marriage, etc). The seminar will be writing intensive and discussion-based. Students should anticipate reading a book every week.

Politics 33A, American Constitutionalism I

This course examines the role of the United States Supreme Court in the American political system.  Combining historical, institutional and analytic approaches, it reviews some of the Supreme Court’s landmark constitutional decisions, focusing on the ways in which this “least dangerous branch” has influenced and shaped the power relationships between the three co-equal branches – Executive, Legislative and Judicial – and between the federal government and the states over time.

Some of the recurrent themes of the course include an analysis of the “counter-majoritarian dilemma” and how it squares (or doesn’t) with the establishment of judicial review, the role of the Supreme Court as a power broker mediating struggles between Congress and the President, its history of policing (or not) the boundaries between the states and the federal government, and the techniques of constitutional interpretation that its members have used to persuade the American public at large that their decisions are well-reasoned and legally legitimate; i.e., that these unelected Justices are not simply “legislating from the bench.”

This course examines the constitutional law and politics of civil liberties and individual rights in the United States through close reading of some of the landmark cases of the Supreme Court of the United States. The course focuses on the Bill of Rights and the Second Founding, with an emphasis on the First and Fourteenth Amendments, paying close attention to the way in which judicial interpretation of the Constitution has shaped and influenced the political and legal struggle over issues such as privacy, segregation & desegregation, affirmative action, abortion, voting rights, free speech, religious liberty, and marriage equality.

This upper division course examines the intersection of law, politics, and policy in the American context. It investigates the opportunities and pitfalls of legal advocacy, the relationship between litigation and legislation, and the nature of judicial interpretation and policymaking. In doing so, it explores the ways in which legal decisions and processes shape and are shaped by political and institutional conditions.

The first part of the course focuses on theories of law and policy and the structure of the American legal system. The second segment applies those theories to case studies in civil rights, gender equity, environmental protection, and same-sex marriage.  Engaging both classic and contemporary material, the course will address some critical questions about the role of courts in the American democratic system.  These questions include (but are not limited to) the following: Why do so many important policy debates end up in the courts? How do judges make decisions? Are courts countermajoritarian and thus undemocratic? Can courts help bring about social change? Can courts frustrate social change and/or political progress?

This course will serve as an introduction to the American political system – its historical and constitutional foundations, its institutions, its inputs (mediating institutions like elections, parties, the media, etc) and its outputs (public policy).  Major themes explored include: the political consequences of federalism and fragmented power; the degree to which political institutions are *truly* democratically representative; the motivations and behavior of political actors; and the involvement of the public and the media in shaping political outcomes. In addition, we will spend some time evaluating the consequences and implications of this period of extreme party polarization in which we currently find ourselves.

This writing-intensive freshman seminar is focused on critical inquiry and satisfies the college’s requirement for ID-1. The driving question(s) of the course include: Why are so many political issues resolved with lawsuits in America? Why do courts and judges seem to have so much power here? How and under what conditions can lawyers bring about radical change in society? Throughout the course, we will interrogate the relationship between law, politics and social change in the United States. We will examine the potential and the pitfalls of deploying law and lawyers as agents of change in society.