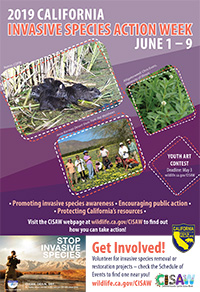 The California Department of Fish & Wildlife designated June 1-9 as “California Invasive Species Action Week“, and we at the BFS are doing our part! We teamed up the Sustainable Claremont’s Green Crew to remove invasive plants from an area currently undergoing restoration.

The area was bulldozed during the installation of a sewer line during the renovation of the old Claremont Colleges’ infirmary for use by Pitzer College’s Robert Redford Center for Southern California Sustainability. To restore the area, Rancho Santa Ana Botanic Garden, which is conveniently right next door, propagated plants from the BFS to preserved the genetics of the indigenous plant community.

We outplanted groups of new plants in November 2017 and December 2018, and we are pleased to see they are doing quite well. Nonetheless, those pesky invasive plants love nothing better than a disturbed area, and aided by this year’s heavy rainfall, the spaces between the plants had gotten filled in with a lot of invasives – mostly Short-pod Mustard (Hirschfeldia incana), but also Tree Tobacco (Nicotiana glauca) and Tocalote (Centaurea melitensis). We wanted to get them out to give the new plants a chance to establish – and get them out we did!

Here’s a photo of the north side of the work area before the crew commenced:

And here’s what happened during the workday:

Until the volunteers declared victory over the mustard:

And when they all left at the end of the workday, here’s what the area looked like:

Here are a bunch of other photos of the hard-working crew: